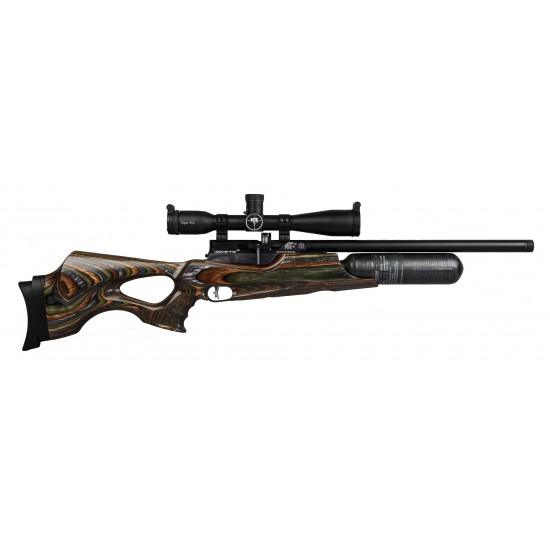 Images are for display purposes only. Unless stated the price of a rifle may not include scope, silencers or accessories.
Daystate Wolverine R Forester HiLite FAC

With its distinctive thumbhole stock, the R model has a sidelever cocking system that can be switched from right-side operation to left, further building upon the ambidextrous design of the stock. This special edition has the same regulator as the standard Wolverine R, developed specifically for Daystate in partnership with the renowned Dutch regulator specialist, HUMA-AIR. With a greater number of shots returned per fill-up a sub 12ft/lb user can enjoy a tin of pellets between visits to their air supply, but a huge advantage on the Hi-Power and 303 models, which will return around 200 per cent more shots than the standard Wolverine 2 courtesy of the regulator’s highly efficient use of air.

Daystate Wolverine R C-Type Walnut FAC
Daystate Wolverine R C-Type Walnut FAC swaps a cocking bolt for the in-vogue sidelever cocking system, increasing yet further the appeal of this very ..
£1,599.95
Add to Basket
Add to Wish List Compare this Product
Buy Now
We use cookies and other similar technologies to improve your browsing experience and the functionality of our site. Privacy Policy.